The Late Greats by Nick Quantrill

Having been convinced by their manager, Kane Major, to put their acrimonious break-up behind them and launch a comeback, New Holland, Hull's most successful band of the 1990s, is reforming.

Allowing one privileged journalist to document the process. Joe Geraghty is employed to act as a liaison between the different camps. What appears to be a straightforward assignment sees him neck deep in trouble when singer, Greg Tasker, disappears leaving behind a trail of people who wanted him out of their lives.

Geraghty has to choose sides and the investigation penetrates deeper into the city. As the rich and famous rub shoulders with the poor and vulnerable, the stakes increase.

Forced to keep his friends close but his enemies' closer still, the case could see Joe Geraghty lose everything.

The Late Greats is the 2nd book in the Geraghty series, book 3, The Crooked Beat is coming soon... 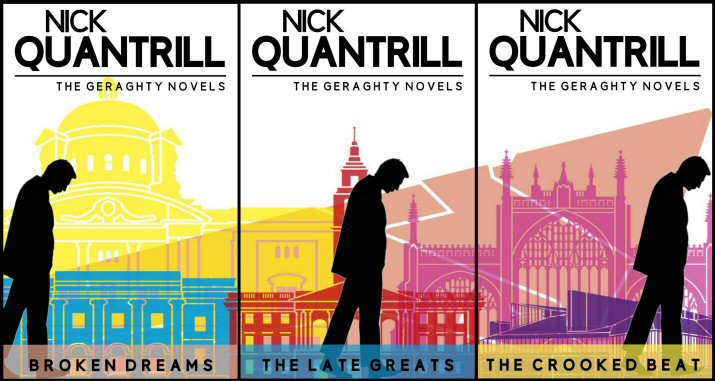 “The Late Greats is a fast paced, page-turner, the weight of which rests heavily on Geraghty's broad shoulders. Geraghty, unlike many of crime fiction's messed up PIs, is an Everyman - a decent and likeable bloke just trying to get on with his life after the death of his wife. Trying to adapt to change. Something many of the characters in The Late Greats are trying to avoid.”

“The sense of character is paramount in this novel, with more details of Geraghty's surrounding cast revealed, giving the reader some tantalising glimpses into possible future stories. The relationship between Geraghty and Julia, the journalist writing the story of the band's comeback, is a very satisfying aspect, with Quantrill's realistic edge running throughout. Similarly, Don and Sarah, the father and daughter team Geraghty works with, are given more of a role in this novel, with more facets to their characters being revealed. Whether that relationship continues after this novel will be interesting to see. However the most enjoyable aspect of The Late Greats is the way in which the fictional band New Holland and its members are brought to life. The musical references and inevitable comparisons to the recent trends for bands to make comebacks (Blur, I'm looking at you) mean there's a richness to the book, giving it a credible edge. Though Quantrill may easily have become lost in this side of it, concentrating too much on the music angle, he manages to maintain focus on the plot. The underlying role of two gangster brothers is also a good addition, tying in well to the main story.”

“One of the things I like most about Nick's writing is his down to earth approach. He knows how to tell a good story in a very believable fashion. I found the dialogue to be slicker and snappier than in his previous novel. Nick clearly has an eye for detail and it shows in his plot structure. Nick's first novel Broken Dreams explored the city's history in a lively fashion but The Late Greats is all about the characters. Quantrill has expanded upon his first novel and brought to life a gripping character driven story that you'll find yourself racing through. A cracking read.”

“In a climate where most successful bands from the late-80s and early-90s are getting back together for one last song, it seems a fitting subject for Nick Quantrill's latest book, The Late Greats. Hull's most famous musical export (no, not The Beautiful South) is band in a similar vein to Blur or Suede, and they're due to make a money-spinning comeback too. One problem, though: their lead singer has disappeared. PI Joe Geraghty is hired by the magnificently named Kane Major - the band's arrogant manager, and throughout his search the PI encounters pitfall after pitfall. Quantrill's writing style is easy reading and his words flow from the page seamlessly - it's easy to lose hours in a day devouring his work. The main difference between this novel and his previous works is the character-driven element that prevails in this story. A good character stays with you long after you leave the book behind, and Nick has  a more than a few here.”

“The Late Greats is the second book in the series following Hull based private investigator Joe Geraghty. This time round Joe is hired by manager Kane Major to help out a band from the Nineties - New Holland, who are gearing up for a reunion tour. Soon Joe along with journalist Julia Gowans is mixed up in a murder mystery involving lead singer of the band Greg Tasker set against a backdrop of the bleak Northern city. Author Nick Quantrill weaves an intoxicating web of secrets and lies using concise uncluttered sentences. Once again the city of Hull in East Yorkshire is fully realised adding further depth and substance to the novel. The Late Greats actually surpasses the previous novel in the series Broken Dreams, showing a writer gaining in confidence and ability. To summarise this is a gritty crime mystery novel from a very talented author.”

“Nick Quantrill's sparse delivery resonates as much with the city of Hull as his series character, each trying new ways to rebuild their former glories and find contentment in their purpose. It's a theme that ripples through even the minor characters - what was, what is, what might have been, what could be if only - which creates an interesting depth both to the characters and to the multi-level storyline. Nick Quantrill certainly keeps the reader bouncing between the different factions in this thought-provoking follow-up to "Broken Dreams". A highly recommended Noir. I look forward to his next.”