Sound Of The Sinners by Nick Quantrill

This title will be published on 21.08.20 in both PAPERBACK & HARDBACK editions.

In SOUND OF THE SINNERS we find Joe Geraghty leaving his new home in Amsterdam to attend the funeral of his former business partner and mentor Don Ridley who was found dead shortly after asking for Geraghty’s help.

With a heavy heart and weighed down with guilt, Joe returns to Hull, a city he thought was in his past.

Don’s death points to his days with the police and an off-the-books investigation into the unsolved ‘Car Boot Murder’ decades previously. As Geraghty investigates the circumstances of his friend’s death he uncovers dangerous secrets and a conspiracy of silence - Hull might have had a makeover during Joe’s absence, but clearly some things never change in the northern sea-port.

With his own life on the line, and with a debt of honour to be repaid, Joe is unable to stop in his quest for the truth, but powerful people with vested interests will always seek to ensure some stories never see the light of day.

If you pre-order either the paperback or hardback editions you’ll be sent an exclusive FREE eBOOK DOWNLOAD of NO DIRECTION HOME – a novella that bridges the gap between the last Geraghty book THE CROOKED BEAT and the new book SOUND OF THE SINNERS and introduces readers to Joe Geraghty's new life in Amsterdam. 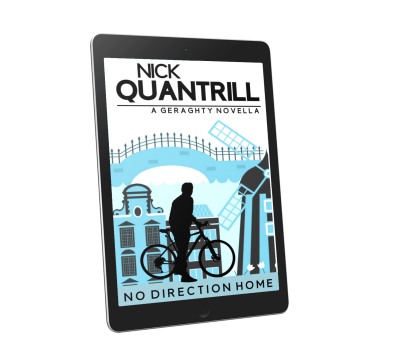 This FREE eBook download is not available for sale – it will only be available to people who pre-order SOUND OF THE SINNERS.

Praise for SOUND OF THE SINNERS

"An unflinching portrait of Hull in the 21st century. Fiercely realist and utterly compelling, Noir at its gritty best." – Eva Dolan

“Set against the backdrop of the historic city of Hull, this book is extremely well crafted. With a believable lead character, who proves time and time again during the course of the story that he is just a normal guy, this novel is an example of the best type of realism in British crime fiction. The pace never drops, with continual action and plot strands effortlessly revealed as the story unfolds. This is a very cleverly created novel. Gritty, realistic and excellently written, this is surely the first in what promises to be an exciting new series.”

“I was looking for a book where the main character did not come with a lot of baggage and I was not disappointed with Joe Geraghty.Two stories interwoven without having to resort to blood and gore to retain my attention. Characters involved were plausible and the story kept my attention.”

“In Joe Geraghty, we have a character to savour. Joe isn't perfect but he's essentially a good man, despite the things life has thrown at him. Flawed, tenacious, loyal and a romantic at heart, Joe gets by one day at a time, driven as much by misplaced guilt as the need to see justice done.”

“First of all, I don't like detective books. I've always found them to be either too predictable or so convoluted and pretentious, they've left me cold. Nick Quantrill's 'Broken Dreams', however, is none of these. In short, it is fantastic. That is not to say the plot isn't complex; it is. A tale of murder, missing persons, big business, and the regeneration of Quantrill's home city of Hull, all woven together so expertly and seamlessly as to leave this particular reader to finish the book in just over two days. And Quantrill's ability to create compelling characters - even the minor ones - and the crispness of his writing, with dialogue to match the great Elmore Leonard, merely adds to the superb realism of the piece.”

“This is a cracking book. It's the story of a man - Joe Geraghty - and a city - Hull - that have taken many a good kicking and are trying to get back on their feet. Realistic and romantic - in a Strummer way - it takes you by the lapels and drags you along from the beginning to the end.”

“Broken Dreams will prove an absorbing read for anyone anywhere, as it does  what proper crime fiction should do - conjure up a familiar world filled with villains, wrongdoings, and cold blooded murder!”

"Author Nick Quantrill weaves an intoxicating web of secrets and lies using concise uncluttered sentences. Once again the city of Hull in East Yorkshire is fully realised adding further depth and substance to the novel. The Crooked Beat actually surpasses the previous novels in the series, showing a writer gaining in confidence and ability. This is a gritty crime mystery novel from a very talented author."

"This is the best book by far in the excellent Joe Geraghty series and Quantrill's writing and story-telling gets better and better. As he steps in to help his brother, Joe is once again taken into the gritty Hull underworld but right until the last few pages you still don't know what is really going to be the outcome."

"You can't help but love Geraghty for his tenacity and determination to get to the bottom of everything he does. The book twists and turns involving so many characters but Nick's writing just flows through it all. Bring on the next one please."

"The power of Nick Quantrill's writing lies not in telling the reader what is happening, but in setting a scene and allowing the reader to become embroiled in its dynamics - a so-called hard man out of his depth when faced with implacable foreign criminals; the poignant interaction of Geraghty and an old lady, both knowing her missing son has been murdered but neither wanting to name the reality; a policeman living with a view of himself that can no longer paper over the cracks. This thought-provoking novel is based among real streets; the characters may be fictional, but the people they portray are very real indeed. If Nick Quantrill maintains the quality of his work he will doubtless become The Next Big Name in Noir Crime. Pick it up. You won't put it down."

"Nick Quantrill succeeds in bringing to life the downbeat feel of the streets of Hull in this excellent novel. Very much like the city itself, his protagonist, Joe Geraghty, is attempting to build a new future from the remains of a problematic recent past. Geraghty is continually being pulled back by the past however, particularly when his brother and nephew become embroiled in the smuggling and subsequent theft of a consignment of cigarettes. Geraghty fights hard to protect his family from the worst excesses of local mobster, George Sutherland, uncovering past crimes and dark secrets in the process. The tension throughout the book is palpable, as is Geraghty’s fear-fuelled determination to keep his family safe. The fact that he does not have all the answers and blunders into a few knocks along the way makes his plight all the more realistic, less sure of ultimate success. The prose, dialogue and settings are all deeply evocative of a cold world, where humanity struggles to overcome the worst excesses of human nature, but more importantly, they make for a thrilling read. Great stuff."

"Joe Geraghty has become a favourite literary character of mine. In this third (and best) novel his story grows. Nothing is as simple as it seems and the tension gradually cranks up - you begin to fear for the characters, not for their lives so much as their peace of mind. Nick is a tremendous talent and has made the city of Hull, a place I know well, a character in itself."

If you haven't discovered the delights of Joe Geraghty yet we're delighted to announce that for the first time, the previous 3 Geraghty novels have been brought together in one chunky 530 page volume. 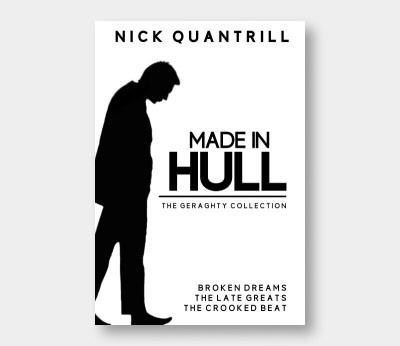 MADE IN HULL contains all 3 Geraghty novels and is available in our store NOW.

Pre-Order Sound Of The Sinners direct from Fahrenheit