Flip me over and do me again 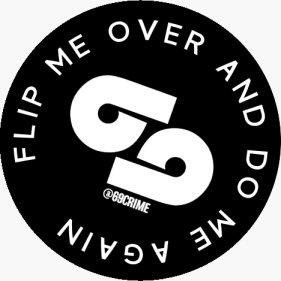 “Crime fiction hasn’t been this cool for decades. There’s something so irresistible about a Tête-bêche in your hands, flipping it over and over. A book with two covers, always beginning. This is pulp publishing at its most seductive.” - Chris Black, Senior Editor, Fahrenheit 13

Back in the late 80s I came across a stash of sci-fi books on a stall in Camden Town. They entirely captivated me. Each book had two stories by two different authors, each printed a different way up – it looked like one book from the front and then BAAAAM, you flipped it over and it was a different book.

They were SO cool. Like having a Double A side single but with books.

They’d been published by Tor Books and I learned later that they’d been done as a homage to the Ace Doubles series that ran from the early 50s through till the early 70s.

Anyway, that was the day I was introduced to the idea of Tête-bêche (‘head to tail’) books and I was hooked – totally hooked.

For ages we’ve known that people have been craving short form fiction but the reality is that it’s really difficult to make it profitable. We realised though that publishers back in the 30s, 40s and 50s had faced exactly the same issues and they’d used the Tête-bêche as a solution.

We know a good thing when we see it so Chris Black and I decided to take Fahrenheit Press & Fahrenheit 13 back to the future and at the same time pay homage to all those old pulp fiction publishers we love so much.

And so we introduce to you a brand new joint imprint @69Crime.

@69Crime will publish the very best in short form fiction across both the Fahrenheit Press and Fahrenheit 13 imprints. We already have a long list of awesome author pairings set up and ready to go – from established authors to brand new debuts from writers you wont have heard of yet.

Pairing up the authors is one of the most fun things we’ve ever done in publishing – we’ve got so many great doubles coming up –  we expect you’re all gonna lose your shit over the pairing of Derek Farrell and Jo Perry who are currently working on something pretty special for their joint edition.

Here’s what Nick Quantrill has to say about his involvement...

‘Bang Bang You're Dead’ was a nice change of pace for me as a writer. My main character, Joe Geraghty, is a Private Investigator, so he finds himself trying to get to the bottom of murky crimes around Hull. This time, I flipped it around and decided to write about the murky criminals themselves. ‘Bang Bang’ is told from the perspective of Sam, a young man fresh out of prison and trying to make the right choices for once, even when circumstances make it difficult for him. ‘Bang Bang’ is set, as usual for me, around Hull, but it was fun to set it squarely in the area I grew up in the city. There’s an element of imagination in there (don’t sue me...), but I worked in the shops mentioned, bought endless pizzas in the takeaway, know the people…

It’s a real thrill to launch the new @69Crime imprint alongside Aidan, and it’s going to be the start of something special from Fahrenheit. I love the idea of two stories in a book together – if you don’t like one, flip it over and try the other. It’s a real throwback to the pulp days.’

‘When I started writing crime fiction Nick was one of the writers I looked up to and aspired to. That my novella Worst Laid Plans is being published alongside his Bang Bang You're Dead is a massive honour. That it's happening as part of the launch of new Fahrenheit Press imprint @69Crime is even better.

Worst Laid Plans is a bit of a departure for me. It's still crime fiction, but it's more of a black comedy. I've tended to write books with more of an emotional pull, that play heavy on family relations, they're great to write - and to read, I promise - but this was my bit of fun that I would pick up and write in between the darker stuff. Don't worry, it still has teeth, but as well as gritting them hopefully the reader will also reveal them with a smile from time to time as they read.

For me pairing Worst Laid Plans with Bang Bang You're Dead is a work of genius by Chris and Chris at Fahrenheit. They're great companion pieces, and I really believe any reader of one will enjoy the other. Both stories have young, dumb criminals getting sucked into things they don't really want to, and yet both books are unique in style and story. I'm really excited to see the reaction to this innovative new release from @69Crime’

So here we go, a whole new adventure – we hope you all have as much fun with @69Crime as we’re having – and if you’ve got a story of between 20k and 30k words kicking around, send it to us submissions@fahrenheit-press.com – if you’re lucky you might just get paired up with one of your crime fiction heroes.

YOU CAN BUY THE VERY FIRST @69CRIME BOOK HERE.